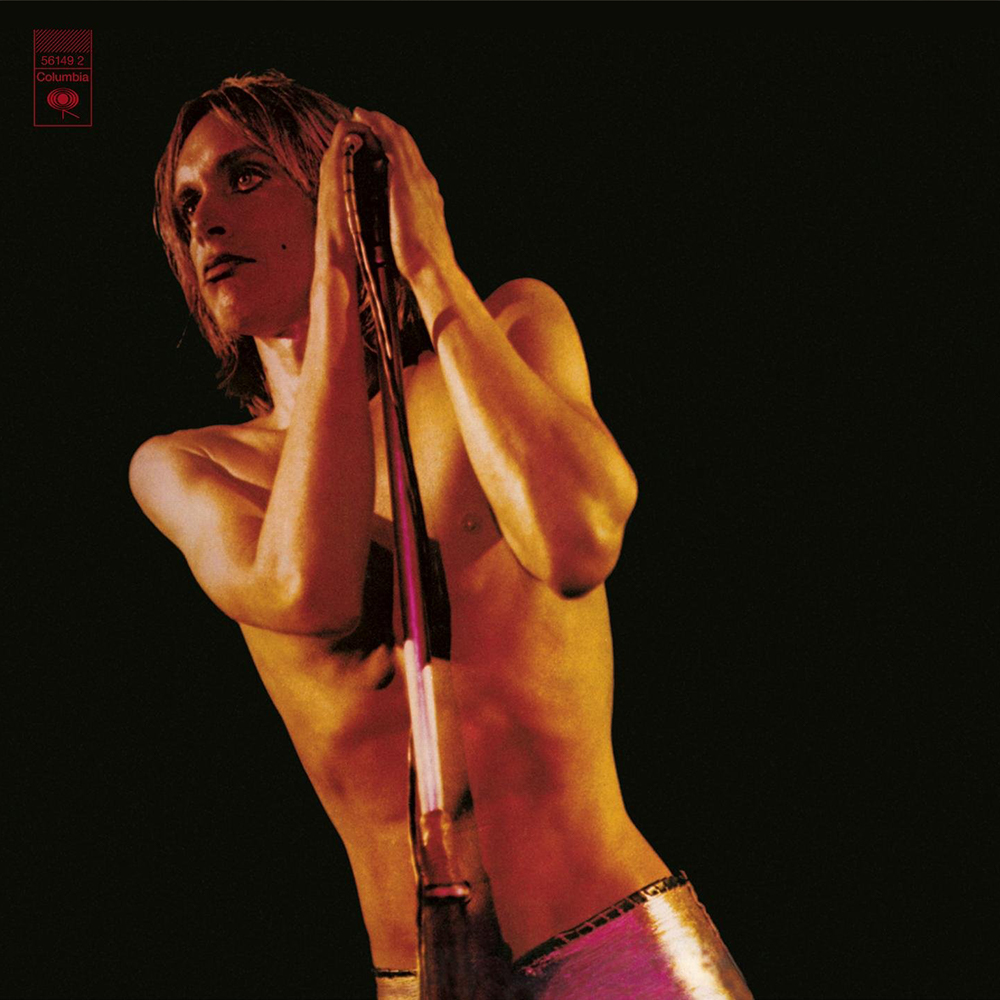 Raw Power is the best high-energy album since Kick Out the Jams, and it sometimes makes me think that Iggy and the Stooges could kick their ex-Big Brothers’ butts in the right kind of alley. I can’t believe this is the same Stooges. No longer the group you love because they put out so much despite their limitations, this band is tremendously powerful and, with the aid of skillful production, the noise-raunch power tremble of complete ecstasy that Kick Out the Jams hitherto represented all by itself is finally fully realized IN THE STUDIO. Consider that, boob-a-la -- it’s like staging an air raid on Hanoi in Grauman’s Chinese Theatre.

Iggy kicks it loose from the beginning. The guitar charge is just like the old Five guitar work, tremendous bursts of apocalyptic interstellar energy, limited only by contemporary technology, harnessed to a strong, if unsteady backbeat. Bassist Ron Asheton pulls down the sound, melding it into something almost earthly, just like a great jazz bass player does, while the rest of the band accelerates beyond anything that’s been recorded, or played live or even dreamed of, in years, so hard and so fast that if Iggy wasn’t the singer you’d wonder whose record this was. It’s like they o.d.’d Pete Townshend on Quaalude and acid, forced him into a 1965 time warp and made him keep all the promises he made in “Can’t Explain.”

By the time the second song, “Raw Power,” comes on, you’re startled, so busy trying to figure out what this meta-meta-morphosis portends you can’t quite believe that the record is doing it all by itself, so you look around the floor but no, not there, and then Iggy screams:

“Raw power got a healin’ hand/Raw power can de-stroy a man/Raw power is a boilin’ soul/Got a son called rock ‘n’ roll,” which for once isn’t some kind of call to the demiurges who guard rock ‘n’ roll to come out and visit us but a simple statement of irrefutable, pristine fact. Like the songs on the first Stooges record, which had titles like “No Fun,” “Real Cool Time,” “Little Doll,” “I Wanna Be Your Dog,” “Raw Power” is just the eye of the Ig roving around the street, putting down what he sees, not mincing words or trying for fluidity but letting it ooze, rough and uh, raw, splat, screeeeeeeee:

“Look in the eyes of the seventh girl/Fall deep in love in the underworld/You’re alone and you’ve got the shakes/So’ve I baby, but I got what it takes.”

And “Raw Power,” so help me god, begins with an authentic belch, a true-to-life burp -- which is, like farting, a form of truly RAW POWER and it goes like this: urgggllllppppPp. I swear.

Now comes the part for people who never liked the Stooges. Whatever Stooges fans think about them, they are almost legion. “Give Me Danger” is the real Iggy ballad, the one El Pop kept threatening us with when he did tunes like “Ann, My Ann” and “Dirt.” But this Iggy ballad is one where you can’t make out the lyrics, because of the guitars, which is OK because these guitars are like Jimi Hendrix jamming with John Fahey. You are absolutely not gonna believe this song, or some of the other guitar here (by James Williamson, who switched places with Ron) until you hear it, and then it might take you a week; that’s how long it took me, and I heard ‘em in London only last summer.

Now, this is the part that you won’t believe at all, as if you’re gonna believe me when I tell you how great this record is anyway, but after a while you look at the titles and you begin to wonder what the fuck is this record about? Now, I am not saying that Iggy has made the first dementoid concept album, or some avuncular nonsense like that, I’m just going to tell you what this album is about and you can believe it or not:

Raw Power is what happens if you watch the Vietnam war live on TV every night, and that is the central fact of the culture you live in, for 10 years (or more).

Look at these titles: “Hard to Beat” (Kissinger’d buy that, even); “Search and Destroy,” for which no explanation is necessary; “Death Trip,” ditto; “Penetration,” a sort of behind-the-lines excursion...

Maybe Iggy was imagining -- it’s a big maybe, but what the fuck -- that he didn’t beat the draft, after all; in fact, he went to Vietnam and got his legs and arms shot off and came back a crippled, quadriplegic junkie who got himself atomic-powered limbs and set out to avenge the destruction he had to endure. And the way he does it is to write this song about how he got fucked up, see, with these lines: “I’m the world’s most forgotten boy/The one who searches and destroys.”

And then singing about his fantasy after he got shot, his dream while he was bleeding almost to death, which is that Madame Diem showed up and sucked him off and then fucked him in ways he hadn’t thought possible: “Love in the middle of a fire fight.”

Now you might think this is totally ridiculous, and you’re absolutely right, but that’s what this album makes me think about and I ain’t even told you about the long songs yet.

Everyone talks about how we need a band that can hold the decade in the palm of their hand and spitshine and polish it, but the Stooges just come out and do that, and with their feet they dance a merry little gallows jig, too. Raw Power is like a great James Bond book that never got written, but its concepts are all here. Like when the Stooges play their own version of “St. James Infirmary,” called “I Need Somebody,” where Iggy is bad as Howlin’ Wolf pounding Mick Jagger on the head with a 40-pound stack of Yma Sumac records.

Then “Death Trip.” “Baby want to take you out with me, came along on my death trip.” Real-ly. Death to the death culture and all that rot, as David Bowie taught him to say. Iggy immerses himself in all the rage of being fucked up, and more appropriately, fucking YOURSELF up that anyone can imagine and then he sings, like a love song: “I’m with you and you with me/We’re goin’ down in history.”

And he ain’t talking about no blow job, neither. He’s talking about going down in history, like Hitler, like Rasputin, like every mangled dictator and dog-eared mass murderer there ever was, if you’ll just come right along on his little death trip -- here, step inside. Stab, stab.

I’m tempted myself. Only a truly diabolical mind could have made the best album of the ‘70s, of course, and Iggy apparently has it because he’s summed everything up and it took him only nine songs to do it. And he didn’t have to write any songs about being/not being/wishing he was cosmic, or a star or some bullshit.

Step inside the Fun House, home of the 0 Mind, and we will all have a real cool time, AC/DC and Raw Power alike.

Tag: iggy and the stooges, Records