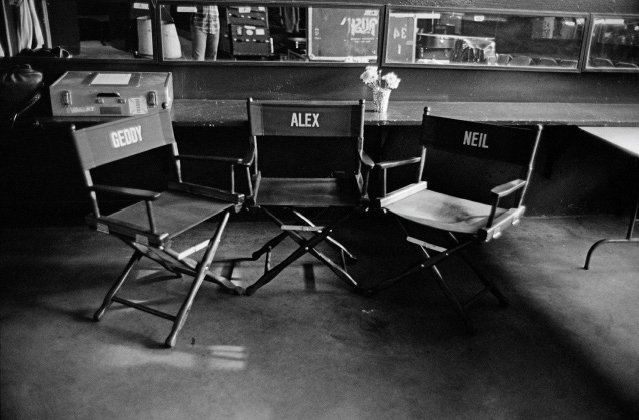 appeared decidedly normal — except
for his eyes, which have the zomboid intensity of the you-can’t-escape-me zealot. (I should mention, perhaps, that Peart has no sense of humor whatsoever, although he’ll deny that claim. What the hell, maybe he does have some kind of sense of humor, but you’ll probably find Kennedy’s brain buried in your backyard before you find it. In any case, it goes a long way in explaining what followed.)
First off, we had to clear up — for the sixth or seventh time — exactly why Geddy Lee wouldn’t talk to us. (Let me make it clear that I rank a conversation with Geddy Lee just below “standing in line” on my list of cool things to do.) The entire thing stems from a tragic misunderstanding: in the October 1980 issue of CREEM — I’m pretty sure it was CREEM, but maybe I should check — editors Whitall and DiMartino cooked up a fictional debate between “Janie Jones” and (uh-oh) “Geddy Lee Roth” for the ever-whimsical Eleganza column. Well, perceptive-guy Geddy sure enough knew where they got that name from ... although I’m not saying it didn’t take him several days of hard thinking.
Satire-hater Peart explained: “It was insulting — the things that were put into his mouth were things that he would never say, in a way that he would never say them. And no one in their right minds would ever want to be compared to David Lee Roth.” Don’t take it seriously, David
Lee, I betcha he’s only kidding!
But no! “The magazine did it,” Peart continued.
“The magazine did what?” asked Mark “I Wish I Were At Bookie’s” Norton.
“The magazine slandered Geddy.”
Pouring oil on these troubled waters (and simultaneously looking for my Bic lighter), I said; “Wait a minute. If you took this to court, CREEM would win hands-down. It’s clear-cut satire. And there are laws that say that if this is obvious satire, there is no libel.”
“Obviously,” Peart agreed. “Are we talking about laws, though, or are we talking about morals? It was immoral; it wasn’t funny.”
“I’m glad you mentioned that,” I lied. “I see a lot of threads running through your lyrics, but one I can’t pick up on is humor. Is there a reason for this? Is there something I’m missing?”
“I’m not a comedian. I’m a musician and a lyricist ... I’m not interested in being a humorist.”
Well, you and me and Rick Johnson make three, Neil, old pal. Knowing a good thing, I pressed on: “Do you see rock music as being funny in any way?” “Hmm,” mulled the author of “By-Tor and the Snow Dog.” “Some people I think, are — ‘witty’ — put it that way,” he said, pronouncing the word “witty” in an exaggerated sissy tone.
“It’s just that this — what I would call a lack of humor — is what let you guys in for a lot of criticism,” I offered.
“No, no. You see, you’re dealing with cynical, jaded critics here, who in a lot of cases are frustrated musicians. The people who have given us the ‘humorless’ tag are the frustrated, jaded people ... cynical ...w ho think the only thing that’s good is what’s funny and off-color.”
I didn’t have the heart to tell Neil the real truth, namely that this frustrated musician hoo-hah is just the tip of the iceberg. What we really are is frustrated writers. Now, can anybody guess why?
“If we laughed at our work then we’d laugh at our audience, just like so many bands do. They say, ‘Hah, these stupid schmucks,’ and they [the stupid schmucks] soak it up. We don’t look at it that way. We give our audience the credit of being as intelligent as we are.”
Danger! Danger! Straight line!! But who are these blackguards who are out there laughing at you jerks anyway?
“There are lots of people who do laugh at their audience. Lots of bands and lots of writers and lots of authors do it.”
“But, let’s face it — rock music isn’t Jesus Christ back on earth,” I said. “It’s simply another mode of entertainment. It can be funny.”
“If you look at it that way. To me, it’s a reflection of my life. I spent the better part of my life learning how to do it, so to me it’s not a joke.”
Well, seeing that things were really moving along, I figured I’d try the old aren’t-you-guilty-now-that-you’re-rich chestnut.
“Do you feel guilty at all about making as much money as you do compared to other people who work every bit as hard you do?” I equivocated.
“Uh, no; on the contrary. There’s no amount of money that could pay you back for what you go through doing what we do.”
“What about the other people?”
“Which other people?”
“You know, the ones that work for a living.”
“It’s really not the same. I mean, I have done ordinary jobs. You can’t go out in front of 10,000 people and make a fool of yourself. It’s really not the same as going to work in a factory every day, I’m sorry,” he said, addending his nervous-tic laughter.
“But I’ve heard the Stones slop up songs beyond belief — I mean, the Stones — I heard Keith Richard come in on a chorus of ‘Honky Tonk Women’ where there was no chorus! It was OK.”
“They’re the people that laugh at their audience,” explained the patient Peart.
“The Stones?”
“Sure they do. You don’t think they’re good.” This wasn’t a question; it was a statement.
“I think they’ve written a good song or two.”
“You can’t say they’re good musicians,” countered Peart, who was evidently talking about some other Stones than the ones I’ve been listening to.
“They’re good musicians. They’re astute songwriters.”
“Astute? In other words, clever marketing strategists.”
A little later, this “marketing” baloney was sliced a little thicker. We’d gotten around to the sophomoric ending of “Spirit

“YOU CAN’T SAY THE STONES ARE GOOD MUSICIANS”
-NEIL PEART