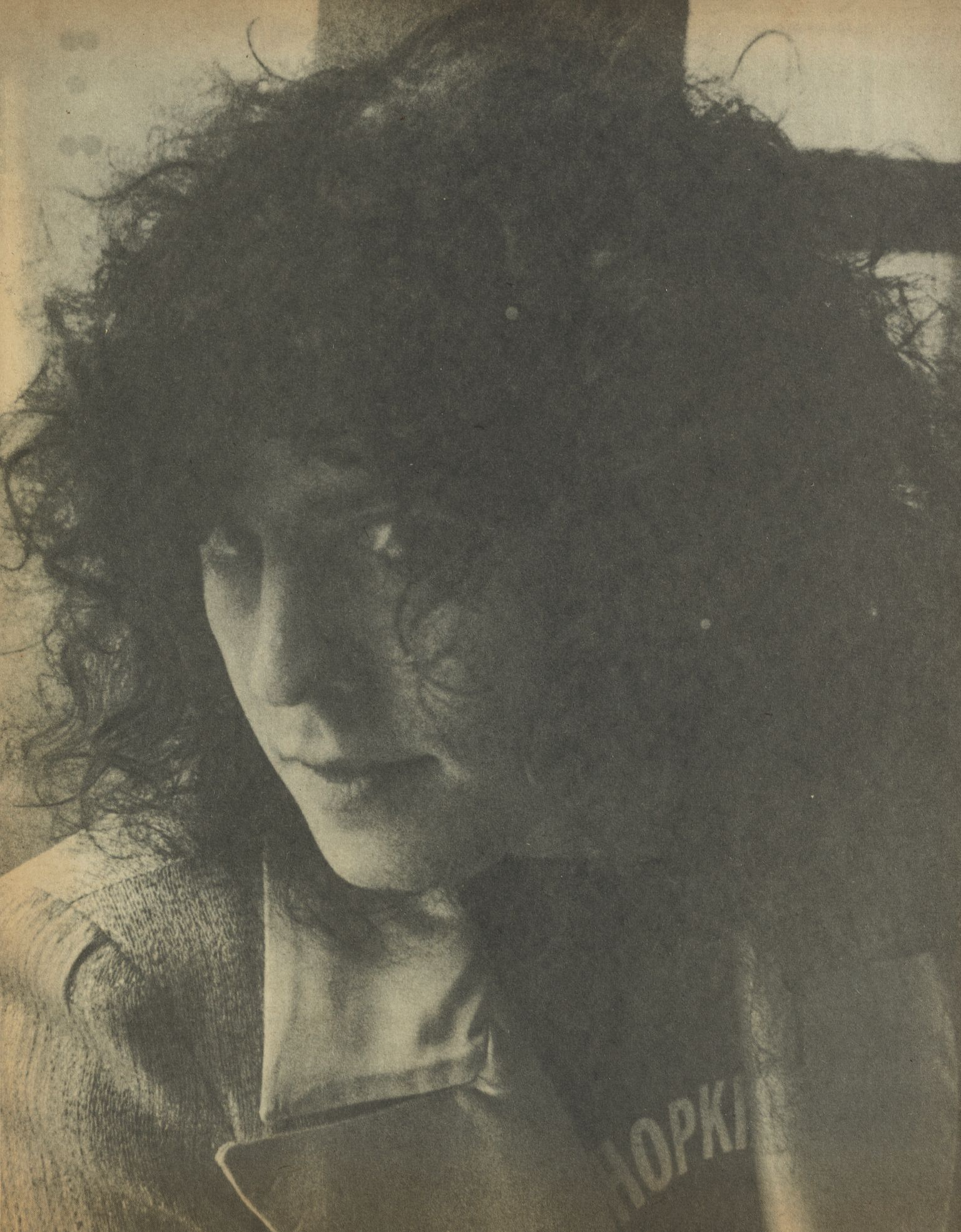 T Rex: "What They Tried To Do With David Bowie Was Create Another Marc Bolan."

The little dynamo spouts off on the competition and (natch) his own genius.

Just eighteen months ago, T.Rex was being loudly heralded as the next big thing, the next phenomenon, the next Beatles (John and Ringo nodded in agreement). They—or he, being that T.Rex is only Marc Bolan and whoever else he happens to bring along—had racked up an amazing string of chart-topping singles in England, and the success of “Bang A Gong” seemed to point to a repetition of that triumph here.

It didn’t happen. We’re still waiting for a follow-up hit to “Bang A Gong,” and the lack of any substantial singles action has been a dominant factor in T.Rex relative failure. The massive hype didn’t help much either. Its backlash created a situation where the prospective audience was forced to make a judgment before they’d heard the band, and it hurt. Many of the dates on the last tour were cancelled to avoid embarrassment of half-filled houses. Their albums have sold steadily if unspectacularly, and while it indicates that there’s a market for T.Rex in this country, the size of that market remains a disappointment in light of what had been expected.

Cameron Crowe talked to Marc Bolan on that last tour and found him to be the same personable egomaniac he’s been since the Tyrannosaurus Rex days, seemingly untouched by his failure to crack the biggest market of them all. Nut that is certainly Bolan’s charm, and may be the source of whatever measure of success he’s achieved so far. He carries himself like a star: relaxed, self- confident, slightly arrogant and always ready to assume victory even in the midst of defeat. He’s the ultimate punque. If he isn’t the Beatles, he’s at least colorful, and yes, maybe even loveable.

Are they? In England, they tried to sell his records by saying in the ads that were “high in the American charts,” when in actuality they were only 144th. Them, media-wise, they created me into something of a monster. They’d put me on the cover of their papers and sell a million more copies than they usually sell; then suddenly, because I wouldn’t talk with them as much as I did when I first started, they’d say I hated David Bowie.Essentially what they tried to do with Bowie was create another Marc Bolan, but the interest with the kids was not there. His concerts have not done well over there. “Starman” only got to about twelve on the charts, which is not good. And the other single didn’t happen at all—“John, I’m Only Dancing”—it was very bad actually. I’ve known David for about five years and he’s all right. I’ve played on a lot of his records.

It’s a commercial maneuver. I mean, I don’t consider David to be even remotely near big enough to give me any competition. At the time the feud story hit England, my records were number one, and they stayed number one while David’s never came near. I don’t think that David has anywhere near the charisma or balls that I have. Or Alice has. Or Donny Osmond has got. He’s not gonna make it, in any sort of way. The papers try and manufacture a lot of things. They tried to do something with Slade. Slade is just a jive little group who are quite sweet and bang about a lot. They’re very valid for what they do, but I don’t think anyone can seriously compare them to what I do. Whether you think I’m good or bad, I’m still the best-selling poet in England. I don’t think anyone in Slade can write four words. And I don’t mean to be condescending; they’re nice people.

Do you feel your position in England is temporary?

I think life is temporary; on that level, yes. On the other aspect, no. There’s no way I can’t continue in England. These past two years I’ve been ground down people’s throats in Europe so hard that they’d need a brain-washing machine to get of the Marc Bolan picture. They’ve gotten so much, they can’t erase it. It’s like, whether you like it or not, you’re always gonna know who Elvis Presley is. It’s like that with me. I’m always on the front of the national papers; I’m always on television. It’s different from America, you see, because you have so much media here that a lot of it washes over you. In Europe, you’re sort of given one thing at a time.

Are you saying then, that it’s easier to create a phenomenon in England?

Well, it always seems like fame happens overnight for bands in England. 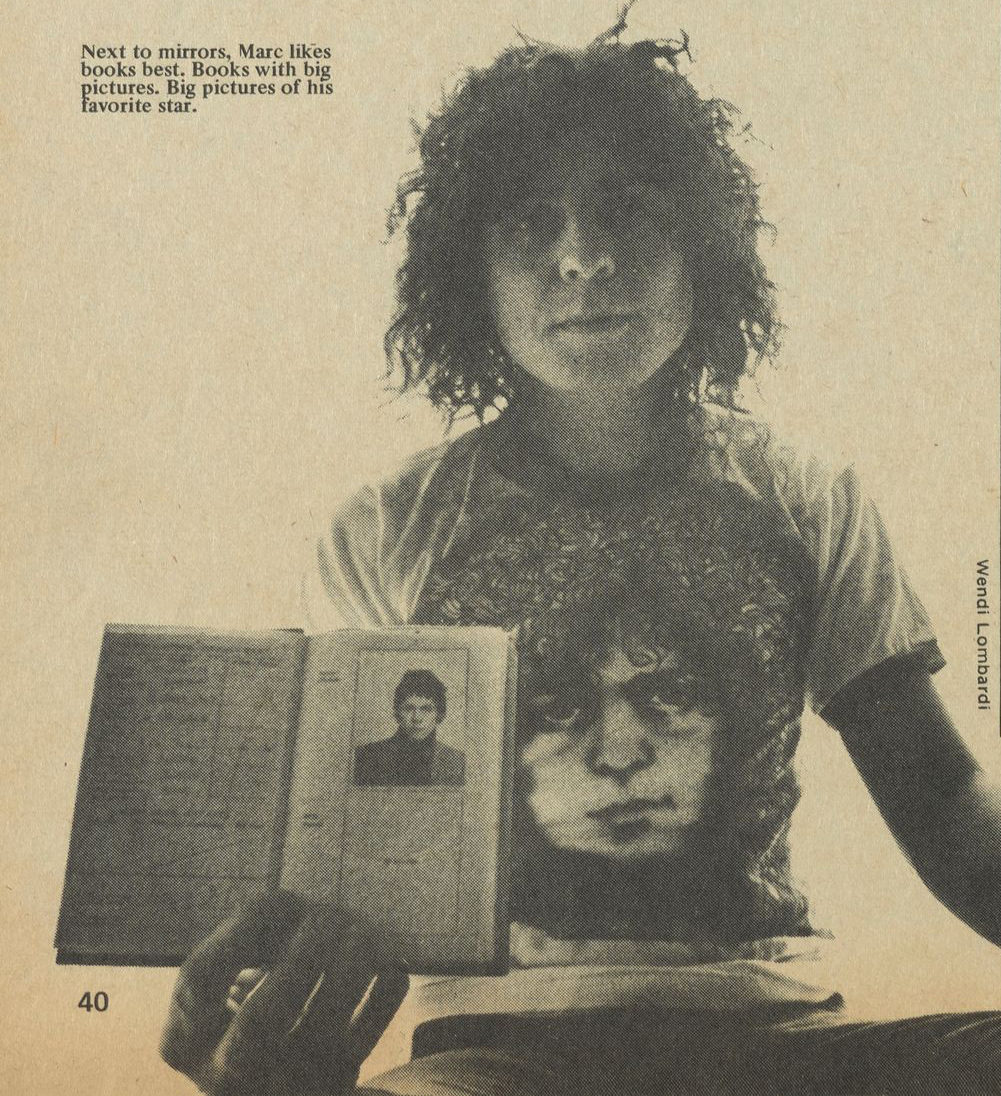 Normally, a band that has happened very quickly, but it actually took a year-and-a-half. Roxy Music has taken two years.

Argent will never make it because they don’t have the right feel. You have to have a certain feel; a certain something. I meant, ninety-five percent of my success is the way I look. The Beatles were mop-tops. The Stones were dirty, never-washed bad boys. That’s what people pick up on. The music is secondary. You do have to have good music, though, after the initial physical contact. But initially, it’s got nothing to do with music.

Isn’t that kind of insulting?

No; I’m generalizing. It’s not everyone. Sometimes, it’s a person’s character… like Marlon Brando. I’ve always gone to see Marlon Brando; I’ve seen every film he’s ever done. He’s interesting, like Jean Moreau, James Dean, whoever. Going back to the David Bowie thing, his manager is a weird sort of dude. After their one minor hit record, he was saying ‘David, man, he’s too big for this rock & roll thing. I see him branching out into movies. I see him as the next James Dean.’ After that, nothing. It’s all pre-mature working. He just doesn’t have that sort of quality. I do. I always have. Rod Stewart has it in his own mad way. Elton John has it. Mick Jagger has it. Michael Jackson has that quality. David Bowie doesn’t, I’m sorry to say.

I don’t care if anyone agrees with me, but I’ve never done anything wrong in my whole life. I’ve spent a couple years starving and shit, but I’ve always been able. I was a male model for awhile, and was making all kinds of bucks, but I quit because I just didn’t like it. You work at what you do; you learn your craft. I never thought that I couldn’t do anything. I don’t put restrictions on myself. Anyone who’s a true artist doesn’t. I don’t believe in popstars. I could own this hotel if I wanted to. I could go downstairs and buy it right now, but what does that mean. C’mon. It’s the people that dig that scene that are disturbed. I use my ego to get rid of the hang-ups that I have. Fortunately, I know what they are and they don’t hang me up. I use them to pay my rent.

You seem to be getting more involved with movies… I think it’s a natural progression for anyone. I want to do my own equivalents of Jailhouse Rock and Girls, Girls, Girls. I find it very interesting. It’s a different media and it offers different possibilities. Recording still turns me on, though. I still like to record. I’ve never written a bad song; I wouldn’t know how to. The Slider was kinda low-key, but this next album (Tanx—Ed.) is much more of a rock & roll album. It’s so energy-rock it’s frightening.

But I look at everything as temporary, to be honest. I don’t consider myself to be successful. On the outside terms I am, but I don’t think I’ve even started. Right now I’m the biggest selling poet in England. I hope to be even bigger. When I’m 75, I’ll be able to tell you whether I’ve truly been successful or not.