My Night Of Ecstasy WIth The J. Geils Band

My Night Of Ecstasy WIth The J. Geils Band 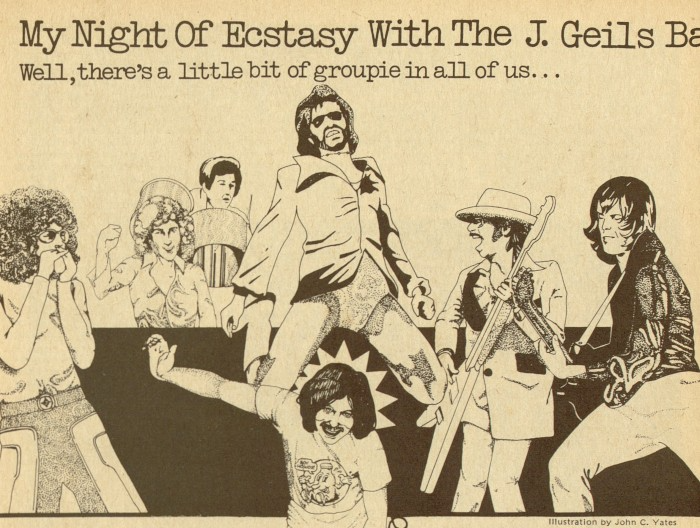 You may think it's more kicks than pricks being a hotshot jivescamming rock magazinero, but contrary to conventional wisdom it ain't all glitz and gravy. Sure, you get the free albums, junkets, punkettes and tee-shirts, but you also have to exercise a modicum of creativity now and then - i.e. thinking up new story ideas - which sometimes necessitates engaging in actual work.

Case in point we were all sitting around the office trying to figure out what in hell to do with J. Geils this time. We'd handled 'em from the Beantown Get down history-of-the-band dryasdust angle, we'd described their stage flash in minutest detail, we'd even gone so far as to say they were better than Alice Cooper. So now we were up against the wall, Mother Howdy. Should we wimp out with a Circus type spread: "The Hemorrhoids That Almost Ended Peter Wolf's Career"? Or maybe opt for the Rolling Stone approach: "J. Geils Discuss the Political Future of G. Gordon Liddy's Grandchildren." Or sleaze down all-out crass a la Rock Scene: "J. Geils Attend a Party Thrown By Mickey Ruskin, Jackie Curtis, Steve Paul's Chauffeur and Thirteen New Drag Queens."

No, newt, nada. Having the high journalistic standards we do, we engaged in a marathon 38-hour valiumosis encounter group whilst sitting around the office waiting for Buddy Miles to trash us, and came up with a concept of unparalleled brilliance: "J. Geils Explain Greaser Culture."

That's right, we intended to have Peter Wolf explainng how to hotwire a car, Seth Justman demonstrating the technique for uncapping a beer bottle with your teeth, and plenty more stuff even more revelatory to sequestered suburbanties (i.e., chickenshits) amongst our readership. So we went down to their hotel next time they hit town and slapped 'em with it, and the total band response was galvanic:

So there we were, taking pictures of 'em slopping up the Boy Howdy beer, while I'm fumbling through the seeming only alternative: a "straight" interview, soberly discussing the state of rock today and the crises that we, ussens as a youth culture, have passed through in the last few years. It was so sober it was sombre, it was dreary, it was death. It wasn't working, even I was nodding out, they were all staring at me, and finally J. Geils said: "Lester, did anyone ever tell you you look like Rob Reiner?"

I leaped out of my chair at his throat: "Bullshit! Don't tell me that! I do not!" It had happened too many times before, and they all started to laugh: "So that's what it takes to get him to react," said Peter Wolf, between pulling homo riffs on Danny Klein, who wears pink jackets.

So now we were on realer ground and started jiving around, and at length

I said: "Hell, the only difference between you musicians and us rock writers is that people can see you doing what you do. I can't go up in the street and say: `Hey, honey, dig my far-out John Lennon review,' because she can say, `Kiss my ass, Jack, how I know you wrote that?' "

"All right, " says Wolf, putting both our coins on the line, "then why don't you come onstage with us tonight and do your thing and let's see what happens?"

I was floored. I could see myself up there, flexing my cheerios at last in the lights I had deserved for so long, the roar of the greasepaint, the smell of the fans, my fans. For is not every rock writer a frustrated rock star, and didn't I deserve my 15 minutes of instant celebrityhood? Damn straight, mother. I took 'em up on it, and went home in a blear of ecstatic anticipation.

At home I tried to cool out with a little transcendental meditation, but it was all too, much. I was hot to trot my dots and dashes, so I plowed through a baloney sandwich and scoured the house till I found an old beatup typewriter left there by one of our former boarders. A useless item, really, except for such an act of theatre as I was about to perpetrate. I hadda take a sound check, so I set it up on the dining room table and plugged it in, pecked a few keys - it would barely write, but made sufficient impression on the paper that I was sure that I would emetge from this escapade not only with all the glory and groupies rightfully mine, but a masterpiece as well. My date arrived wearing a wig and I didn't even notice, that's how excited I was. I could barely concentrate on All in the Family, that's how excited I was.

When we arrived at Cobo Hall the place was buzzing with anticipation. I lugged my axe - Smith Corona, Mr. Advertiser! - into the dressing room and set it in a corner. A few of the women around looked at me strangely, but Peter Wolf came up and inquired if I was ready to roll:

"Everything set? Got your typewriter?"

Ah, at last shouldering it among my peers, the great stars of this generation! I got paranoid about leaving it in the locked dressing room while the Geils band did the first part of their set (I was coming on for the encore), so I took it out and hit it in a corner by the backstage shadows. Then I went and told second-liners Brownsville Station what I was going to do, and they laughed at me! Well, bite the bag, peons! I was in the majors now! So sure of my stardom I even dressed for the occasion: denim jacket, blue and white shirt, sweatervest. It would not do to come on trendy, I decided; wake up mama and tell Lisa Robinson the news, the next big rock 'n' roll fashion trend is gonna be the college boy look, or my name is Carlos Santana.

I ran into Robbie, celebrated local limousine driver about 50 years old whom all the girls love because he's suaver than ten Rod Stewarts, and shaking his hand I beamed: "Wait'll you see what I'm gonna do out there tonight! I'm gonna blister 'em!"

The set seemed interminable, and when the encore came and I heard my name I strutted up and onto the boards, Smith Corona in my hand, no trace of stage fright. I set the machine down and clenched my hands over my head like a boxer the better to bask in the adoration of the mawsome throng, two of whom applauded, one of whom was Leslie Brown, whose desk sits to the right of mine. I grabbed the mike and hollered "Thankyouthankyou," just like on Kick Out the Jams; I figured to include the whole riff - "I wanta see a sea of hands out there" - would be less than subtle.-As it was nobody got it, but tough shit, the same thing has happened to Yoko Ono dozens of times. So I commenced to yell at the roadies just like a true superstar: "Plug the sonofabitch in! Let's get down!"

They did so, setting it on a bench at stage right for me, and I kneeled down and with a consummate sense of theatre took my sunglasses out of my jacket pocket and put them on. Then I held up one of the two sheets of lined notebook paper I'd brought along, just for the crowd to ogle, and slipped it in the machine. I looked over at the band, who were. waiting for this cue, and J. Geils cued me right back - brother! slap me five! - as we broke into the opening bars of "Give It To Me."

It was at this point that I realized the absolute ludicrousness of what I was now doing before a packed house of umpteen thousand sneering peers. The first decision I had to make was whether to treat it as a total joke and just peck at the thing desultorily, or really get into the funky bloozy woozies and try to peck along in rhythm. Hell, they had it miked, I started trying to play on the beat, grinning and nodding at the rest of the group who grinned and nodded back as the peanut galleries gawked, hawked and kfweed. The writing was coming out great too: "VDKHEOSNCHSHNELXIE N(+&HSXN+(E(aJN?." I heard one of the roadies, kneeling a few feet to my ,- right, laconically drawl: "Yer doin' great, man," Vengeful bastard.

I even threw in a bit of Townshend/ Alice Cooper destructo theatre: for the songs's climax I stood up and kicked over the typewriter, bench and all. Then I jumped up and down on it till I smashed it to bits, or two of them at least. It felt good, purging somehow.

Finally my moment of triumph was over, and I went out to take my bow with the rest of the band. Like Murray the K. with the Stones, I was now the sixth J. Geils. The members of the group hugged me, I grimaced at the audience, we ran off the stage and that was it. Plunging into the backstage mill, I clamped my arms tightly around Leslie and my date. I felt half like Mick Jagger and half like the president of the Stooges Fan Club, and Robbie, who had joined in the encore on cowbell the night before, came forward to congratulate me. I shook his hand again: "When we gonna start our band, man?"

He just laughed, drifting away as the girls began to swarm around him again.